Posted at 00:32h in news
This brief history of Meadow Croft
was prepared by Mr. Donald Weinhart,
the founder of the Bayport Heritage Association.

Meadow Croft is located on Middle Road in Sayville, New York in the middle of the Suffolk County Sans Souci Lake Nature Preserve which divides Sayville on the west from Bayport on the east. The approach to the estate is among the most haunting and beautiful on Long Island, over a narrow concrete bridge and up a long dirt drive embedded in tall marsh grass. Waving in the wind, this grass beckons the visitor back to the Gold Coast period, for Meadow Croft exists in a remarkable state of preservation evocative of the first third of the twentieth century when it was last occupied. The only outside building which is visible from inside the estate is the adjacent St. Ann’s Episcopal Church, its carillon peeling us back to the late nineteenth century when the estate was formed.

The estate occupies a large tract of land dividing the east and west branches of Brown’s Creek which flows into the Great South Bay. The main house, facing due south toward this bay, is divided into two sections: two original mid-nineteenth century farmhouses which were used for servants’ quarters in the Gold Coast era and a larger, more formal Colonial Revival main block designed by the local architect Isaac H. Green in 1891-1892. The older farmhouse, gable-roofed and clapboarded, include a porch, kitchen, pantry and servants’ kitchen, the latter completely paneled in original summer paneling. The Colonial Revival main block, hip-roofed, clapboarded and plastered at the corners, includes a main parlor, dining room, and four bedrooms in addition to a generous foyer and partially finished attic. The full porch extends out to form a porte-cochere over the main entrance. Two bathrooms protrude from the second story of the main house, cantilevered out from the Colonial Revival main block. Installed in 1908, these represent the only important alterations to the original structure. The estate outbuildings include a garage, stable/bam, coach house, caretaker’s cottage, and poured concrete swimming pool of early twentieth century vintage.

The John E. Roosevelt estate records with outstanding fidelity the origins of Long Island’s Gold Coast era in bucolic farmlife and summer resort activity because of its early date, moderate size, remarkable state of preservation, and transitional farmhouse/summerhouse character. Dedicated to the Suffolk County Historic Trust and listed on the National Register of Historic Places in Washington DC, Meadow Croft promises to deliver cultural and educational benefits to Suffolk County citizens and visitors for decades.

Meadow Croft is notable as an early Colonial Revival residence by Isaac Henry Green (1858-1937), one of Long Island’s most important Beaux Arts architects and one of Sayville’s most notable citizens. Green spent nearly all his life in Sayville where he designed many buildings including the old ’88 School house (now destroyed), St. Ann’s Episcopal Church, the present clubhouse of the West Sayville Golf Course (the former Hard estate), and the Oystermen’s Bank and Trust Company Building in downtown Sayville. He is also credited with the main buildings for the first and second Maidstone Clubs in East Hampton, dating from the 1890’s. Green’s chief claim to fame on the national scene derives from his pioneering use of the Dutch Revival style beginning in the Hamptons as early as the 1890’s. This style is signaled at Meadow Croft in the Dutch double doors of the main foyer which may refer to the Dutch ancestry of the Roosevelt family.

As one of the major Long Island homesteads of the famous Roosevelt family which has figured so prominently in American public life, Meadow Croft carries special historical associations. Three Roosevelts can be associated with the estate: Robert Bamwell Roosevelt (1829-1906) who purchased part of the land on which Meadow Croft sits, his nephew President Theodore Roosevelt (1858-1919) who often visited the property, and Robert’s son, a cousin of the President, (John Ellis Roosevelt, 1853-1939), an legal advisor to the President who commissioned the estate in 1891. Robert Bamwell Roosevelt was an important New York State reform politician, United State Congressman from 1871 to 1873, and one of America’s earliest conservationists. Meadow Croft’s present status as part of the Sans Souci Lake Country Nature preserve perpetuated this well known interest of the Roosevelt family. President Theodore Roosevelt is well-known nationally and internationally as the colorful leader of the “Rough Riders” in the Spanish-American War, Progressive Republican Governor of New York from 1899 to 1900, President of the United States from 1901 to 1908, and Nobel Prize winner in 1906 in the category of Peace. John Ellis Roosevelt was a well- known New York City investment banker and an active contributor to Long Island’s social life through his participation in clubs and sports such as cycling and sailing.                         © Donald Weinhart 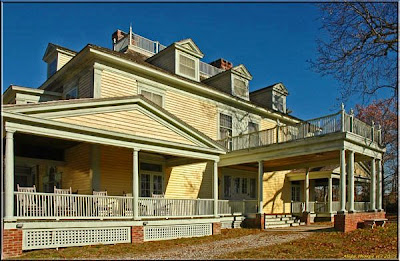 photo © 2009 Alida Thorpe
~~~
Saturday & Sunday, from June through October, Meadow Croft is open for visitors.
Tours will be Saturday and Sunday, 2 pm
Directions: Long Island Expressway (Route 495) to Exit 62 South (Nicolls Road.) At end, turn right onto Montauk Highway (Route 27A). Go about one mile and at Amoco Gas Station, turn left onto McConnell Ave. Go to end, make right onto Middle Road. Entrance is on the right.
Meadow Croft House Tours open Sat. & Sun. 2-4pm June – OctoberThe John Ellis Roosevelt Home known as Meadow Croft located at 200 Middle road in Sayville.John Ellis Roosevelt and his family escaped the summer heat of the city for the cooling breezes of Long Island. The original house was built in 1867, purchased by the Roosevelt’s in 1890 and expanded in the colonial Revival style by noted architect, Isaac Green Jr. It was owned by the Roosevelt’s for nearly a century. By the early 1980’s, the house had fallen into disrepair and was threatened with being lost. Bayport Heritage Association came to its rescue, approaching the county and creating a partnership. During the tour new exhibits include works from local artists, the auto Barn and the long awaited Carriage house.Pack a picnic lunch, take a tour, then go back and do some wine tasting at Loughlin Vineyards.Hope to see you there!For more information email us at bbphistorial@gmail.com or check us out on Facebook at “Bayport Heritage Association”.
~~~

Click on the images below to see the booklet larger for more information. 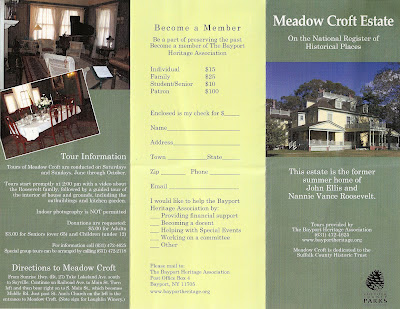 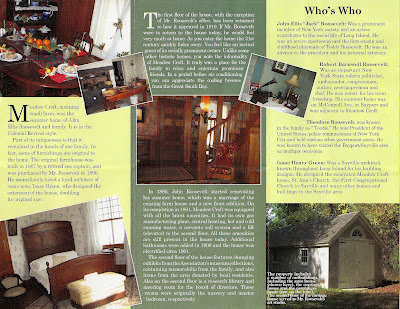